One of the highlights of the year was when two Policemen came to the setting in May to talk about the job they do, the children were interested in the radio and called out hello to the control room, very curious about the handcuffs plenty of offers to try them on and heard how the small baton had been used to rescue a child about their age who had got locked in a hot car by breaking the glass in the window.
All the children then had an opportunity to go and look at the Police car with the lights and siren working. The children asked them interesting questions about being in prison, if they had police dogs, what a judge is like and whether they were at the Royal Wedding. They were then told about how to make a 999 call in a emergency for police, ambulance, fire and the coast guard. Finally we talked about stranger danger and keeping safe. After colouring sheets were handed out the children were then asked to wave when the see any Policemen out and about and especially when they drive past in the police car. 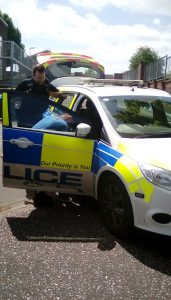 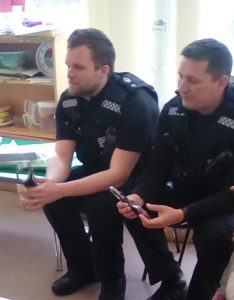 Every year the older children receive a safety pack from the Children’s Traffic Club with lots of interactive activities for the children to do, this year the pack is called Let’s Go, we hope you find it useful, check out the website at www.childrenstrafficclub.com, let us know how you get on with the packs and if you found it helpful.

We have spaces available in both rooms in September, we take fee paying and funded, 30 hours for some eligible parents. Fee paying £12 per 3 hour session.
Just a reminder session times are;
8.50-11.50
12.10-3.10
If attendimg for a full day please provide packed lunch there will be a charge of £2 as this is extra and not included in funded hours.
Ring us for further details.